“Your life is basically a sum of all the choices you make. The better your choices, the better opportunity to lead a happy life.” – Karen Salmansohn

Last fall, low rates were offered for the Naperville Women’s Half Marathon to be held on my father’s birthday, April 23. I signed up for the race on a whim and then forgot about it. But upon the New Year, I realized I’d better start training if I was doing the race. Winter is not a motivating time to run in the Chicago area, but I couldn’t wait until winter was over. Part of me said, “You only paid $30. You’re out of shape. If you don’t do it, it’s no big deal.” 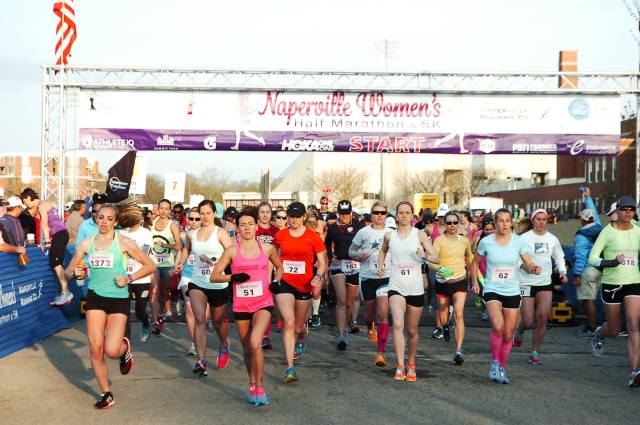 But it was a big deal. Many friends from my running club would be running the race. If I wimped out, how would I feel watching everyone else run the race? And how would I feel if I participated, but wasn’t fit enough to do it properly, struggling to walk it and aching for days afterward? I decided I’d be happier if I trained properly. I could do the race if I worked to lose a little weight and get running-fit.

My first goal was to easily run a local four-mile fun run on February 4. I exercised, but I wasn’t consistent. February 4 was a cold day, and I wasn’t sure I could keep up with the other runners. Besides, I had an opportunity to go out for breakfast. I backed out of the fun run. I had missed my first goal for getting in running condition for the race.

I decided to process this fact without beating myself up. In the afternoon that same day, I ran on my own when it was a little warmer. I ran 3.5 miles, and part of the time I felt I was running smoothly and almost easily. So I wasn’t that far behind where I wanted to be. I decided to push myself to exercise, eat properly, and train seriously. This would be a healthier choice than giving up.

I reflected on the fact that the race was to be held on my father’s birthday. Dad passed away eight years ago from complications due to diabetes and obesity. What would I be saying by running a half-marathon on his birthday? Dad did not want us to follow in his footsteps as far as health. He was very proud of his grandchildren, including their fitness and athletic abilities.

And my parents did things differently from their parents. They both had relatives who drank heavily, and they chose not to do that. They moved out to the suburbs, even though their families lived in the city. They were the first on both sides to send their kids to college. I decided to do the race in honor of Dad’s example of choosing a better way for himself and his family.

I joined a training group and began to train in earnest. I gave up sweets for Lent and made healthier food choices. Our first long run was six miles in early March, and by the end of the training I had done two ten-mile runs. The training presented many challenges. My legs knotted up badly and often ached, and I had plantar fasciitis (pain in my heel). Often, I was the last person back from the runs. At times, I thought I couldn’t do it, but I addressed each challenge as it came along. I used a foam roller, did yoga, and arranged for a deep-tissue massage. I followed suggestions for fueling my runs and told myself it didn’t matter if I was sometimes last. Many of the runners were younger than me, more fit, and had done half-marathons before. I was working as hard as anybody.

My friend Rachell said she would run the race with me. I decided to take her up on her offer. She is a very supportive friend, and it would give us an opportunity to spend time together.

The day before the race, I was extremely nervous, and my legs were aching. I rolled my legs and stretched, then wrote myself a pep talk to get mentally prepared. I knew I had trained hard. I thought of supportive comments made by friends, such as “You’ve got this!” My husband Ken reminded me that I’d done sprint triathlons many years ago. Those required that I learn how to swim. Running a half-marathon just meant I had to put one foot in front of the other and keep going. I said affirmations and visualized myself crossing the finish line, knowing my husband and my sister Mary would be at the race to support me.

And as far as I’m concerned, I did succeed. No, I didn’t have the fastest time, but I ran the race steadily and felt strong throughout. Surprisingly, it was fun. It was a beautiful, sunny day with many spectators and pretty scenery. Rachell and I ran with intervals of 4 minutes running, 1.5 minutes walking. Around the five-mile mark, I saw my oldest daughter, Katie, cheering me on along with Ken and Mary. As I ran, I remembered my Dad and thought, “I’m choosing a better way like Dad did” and, one of his favorite sayings, “Don’t be a chicken all your life!” Rachell and I had a great time and stayed together during the entire race, crossing the finish line together. 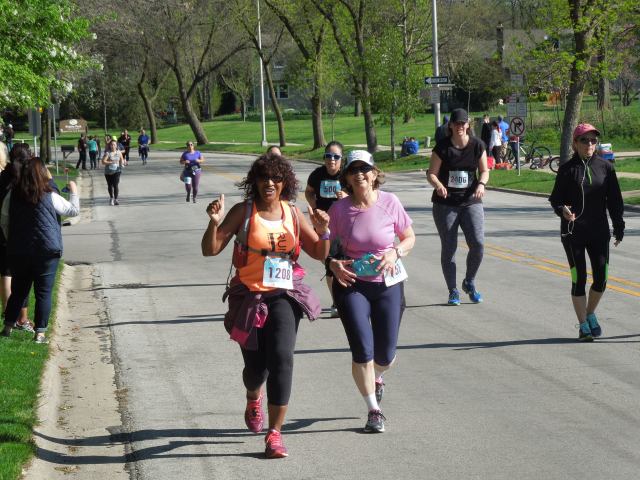 Rachell (left) and I during the race 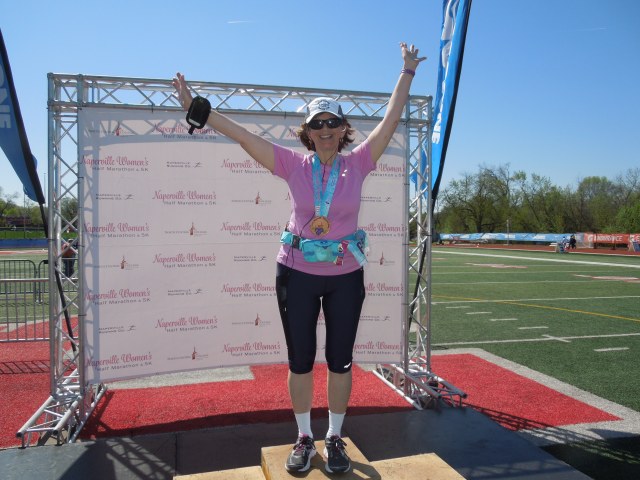 On the finisher’s podium

I mentioned in my last blog post that this is a milestone year for me. I will turn 60 in July. Running a half-marathon was my way to mark turning 60. This is my statement of how I plan to be in my sixties—doing my part to be fit and healthy.

Are you making the best decisions for you, regardless of what others have chosen? What are you doing to stay fit and healthy?